Mangrove Mama’s Restaurant, located on Sugarloaf Key, has been in business for over 30 years, but the buildings that house the restaurant have been around since the early 1900’s, when they were constructed as a stop for Flagler’s Overseas Railroad. Since then then buildings have been a gas station, a grocery store, and finally a restaurant.

Back in the 1980s and early 1990s Mangrove Mama’s was the place to hang out and dine, but with the addition of a few new restaurants in the area and the burgeoning night life in Key West, Mangrove Mama’s does not have the draw that it once had, but many locals still hang out at the bar and listen to live music on Friday and Saturday nights.

The buildings and decor are reminiscent of old times and calls to mind the Bahamas. With indoor and outdoor seating areas decorated with wood accents, brightly painted local art, and palm trees. If you plan on sitting on the beautiful outdoor patio you can even bring Fido with you.

We dined there with some friends this past week. Being early October when the Keys are pretty quiet, they only had a skeleton crew working the dinner shift; one cook, one waitress, and one bartender. It took the waitress a few minutes to seat us since she was waiting on about five tables, and she suggested we sit at the bar because we would have better service there. We helped ourselves to menus and studied from them, although I already had in mind what I wanted to eat here.

The bartender took our drink orders and we also got a few appetizers; Calamari and Shrimp St. Jacques. The shrimp were fresh and cooked to perfection, covered with a rich and delicious sauce. The calamari was lightly breaded and flash fried, served with some chopped tomatoes and balsamic glaze. I did not care for the tomatoes, but the balsamic was a nice touch. And the marinara was a perfect compliment.

For dinner we ordered the Seafood Pasta, Baby Back Ribs, Fried Shrimp, and Mama’s Big Salad.

The seafood pasta is hands down the best dish that they have in my opinion, and the best seafood pasta that I have had anywhere ever. The linguine is cooked al dente and covered in a delicious alfredo sauce. And the seafood loaded in the plate is cooked perfectly. Lobster, shrimp, scallops, and clams make this dish hearty yet delicate.

The baby back ribs were tasty, served with a side of yummy mashed potatoes. The meat was tender and with just enough BBQ sauce covering them all.

With fried shrimp, you run the worry of possibly not getting the freshest available, but these were definitely fresh and delicately fried. Served with a tasty cup of cole slaw and french fried potatoes, this was a tradition dish done right.

The dinner was amazing all the way around. The service was not impeccable, but I did not expect it to be, especially with the skeleton crew. But honestly, the reason that Mangrove Mama’s is not a place that my husband and I dine at more frequently is because the service, even when fully staffed, is usually pretty poor and extremely slow. They already have the food dialed in. Now they just need to get the service that way too and I think that it could once again be the place to eat in the Lower Keys. 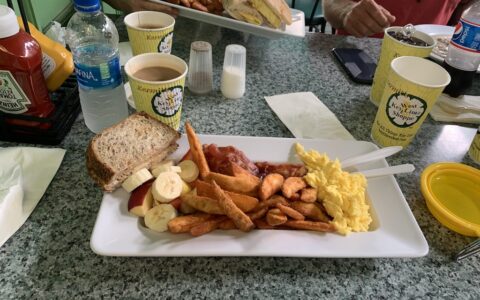