Bad Boy Burrito opened its doors in 2008 and has gained a strong following. It is located at 1220 1/2 Simonton Street. If you blink your eyes, you will drive by this small establishment, so keep alert! I was not sure what to expect before I came here, but I have to say that I almost did not give this place a shot after I walked in. The space is tiny and hot, and there were several people crammed inside the little storefront waiting for their orders to be prepared so that they could take them away and enjoy. The fact that there were so many people waiting was a good sign about the food quality, but I was feeling claustrophobic and uncomfortable. The two benches that line the walls were taken up as was the one table with stools overlooking the street. The two people in the back preparing the food were extremely busy, especially considering that they had to also deal with the customers up front. I actually felt bad for them having so much to do in a hotbox of a building. But they seemed happy enough, and they were friendly and efficient at their work. I had come this far already so I decided I would ignore the space issue and study the menu.

The menu is unusual, and to the novice Bad Boy Burrito customer a little confusing. That is probably why there is an explanation on the menu on how to order a burrito here. Step One: choose a filling. Choices include meat, seafood, and veggie options. Step Two: choose a sauce. Sauces include pico de gallo, tomatilla, verde, mango habanero, and red chili. They do like their spice here! Step Three: choose your toppings. These include everything from cheese to sour cream to pickled onions, and avocado to name just a few items from the list. All burritos come with rice and beans inside. If this ordering process seems too daunting for you, they also have some other menu options to choose from so that you can avoid building your own “phattie” as they call their burritos. There are the Cayo Hueso Fish Tacos, the Disco Duck Quesadilla, and the El Gaucho Ernesto which is what I tried (a burrito filled with chimmichurri marinated steak, jalepenos, cilantro, cheese, and pico de gallo).

Bad Boy Burrito also has a juice bar with drinks for the health foodie. They have a selection of smoothies which changes based on whatever fresh, organic fruits that have on hand. You can also order wheat grass shots, watermelon ague fresco, lime aid, and hibiscus iced tea. Espresso, cappuccino, and con leche served with your choice of organic or soy milk round out the drink options. I tried the iced tea which I did not care for. Much too flowery tasting for my liking.

Getting back to the food, the place finally cleared out I sat down at the only table available overlooking the street. The lady working both the counter and the kitchen brought over my order when ready. I have to say that I was very pleasantly surprised.  The El Gaucho Ernesto was hearty and delicious, and quite spicy, but not too much for my liking. The combination of the fillings meshed perfectly with one another. And it was served with a small side of corn chips and salsa which was tasty and cut the heat of the spicy burrito. I actually did not finish the entire burrito since it was so large and filling. Honestly, it was one of the better burritos I have ever tried. And when I finished eating I brought my plate to the counter and paid a modest $12 plus tip for my meal.

I think that the locals who live near here and eat at Bad Boy Burrito regularly have the right idea about getting the food to go. It is tiny and cramped, and if there are more than a couple of people wanting to eat here at once I would guess that you would be out of luck most times. And even though the burrito was not particularly messy, I still would not want to eat it on a bench. Service was relatively quick even with the limited staff and the large crowd of customers. 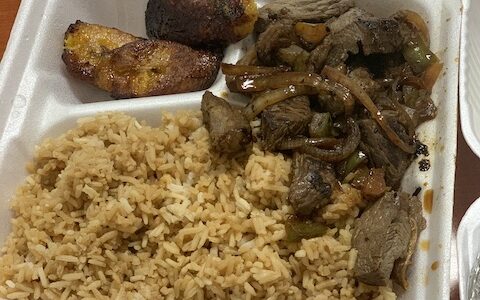 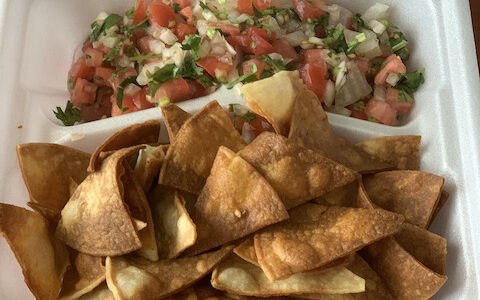