If you are looking for a place that is hard to find and laid back, pretty much what you pictured when you were think Florida Keys, then you really need to visit Geiger Key. About a 10 minute drive north (or east as it would be) from Key West you will find the Geiger Key Marina which also boasts a campground and a tiki bar and restaurant.

Last night we brought my friend Pam there to celebrate her birthday. She wanted to go someplace very relaxed where she could enjoy some good food outdoors. If you have been to Hogfish Bar and Grill on Stock Island, you will find the menu to be very similar, and that is because they are both owned by Bobby Mongelli, Key West restauranteur extraordinaire.

Once seated at one of the large picnic tables next to the water our drink order was taken and we put in for a few appetizers as well. We started with onion rings, buffalo shrimp, and fish dip.

We all love the onion rings at Hogfish, and these are the same with the exception of the dipping sauce. I am not sure why but I actually hate the dipping sauce at the Hogfish, but the sauce that they serve at Geiger Key was much more palatable and I really enjoyed it, although it is truly not necessary to actually enjoy these fried treats.

The buffalo shrimp were cooked perfectly and they were served with a good amount of veggies and our choice of ranch or blue cheese. We chose both and they both paired perfectly with these spicy crustaceans.

The Fish dip was Bob’s, a local maker, and it was served with jalepenos and tri-colored corn chips. There is nothing about Bob’s not to like so this was a win of course.

Even though we were pretty much on our way to full already after the appetizers, we ordered dinner too. Pam got the Cobb Salad, I ordered the fried shrimp tacos, Tommy had the lobster bisque and the shrimp and chips, and Steven had the grilled grouper sandwich.

While I did not try the bisque which was served with oyster crackers, Tommy gobbled it up and pronounced it very good. It did have a nice, thick consistency and the proper hint of pink coloring to it. And the shrimp and fries were great. Tasty and not too greasy or overcooked.

The Cobb salad was a win too. The veggies were fresh and the shrimp on top were grilled perfectly.

The grouper sandwich was real grouper, always a plus since so many places try to pass off tilapia or some other fish as grouper. The fish was cooked perfectly without being dried out and it was a really nice big slab of fish too. Love it when they don’t skimp.

My shrimp tacos were simply amazing. This is my new go to when we eat here from now on. Two soft taco shells were filled with cabbage, radishes, tomatoes, and fried shrimp that were fresh and perfectly cooked. This was drizzled with a delicious sauce and all of these different tasted just melded together perfectly.  It was also served with black beans and rice. I could only eat one of the tacos and I was full, but my mouth was wanting more.

Since it was Pam’s birthday we ordered coffee and dessert too. Unfortunately, she loves Key Lime Pie and they were out. But she and I ended up sharing a piece of cheesecake with salted caramel. They guys both got chocolate lava cake. The desserts are obviously not made in house, but they were tasty enough. The cheesecake was a bit too sweet as I like one richer verses sweeter, but it was certainly not bad. And the chocolate lava cake was so chocolaty that the scent of chocolate permeated the air as soon as the cake was cut into. It was rich and flavorful and warm. We also ordered coffee to go with our desserts. The waitress brewed it fresh for us and it was really good. This I was not expecting because most laid back bars just don’t do coffee right. But they do here!

Our waitress, Ambyr, was really good; attentive and clear spoken And we all decided that she was a dead ringer for the actress Fairuza Balk from the movie The Craft, so that was fun.

The only thing that we did not like was the cole slaw which none of us liked so it just sat untouched and lonely on the table the entire time.

Indiana Bones came with us as well and he enjoyed a few bites of shrimp as well as plenty of carrots. And Ambyr offered to bring him a treat but we declined as he is already spoiled enough. 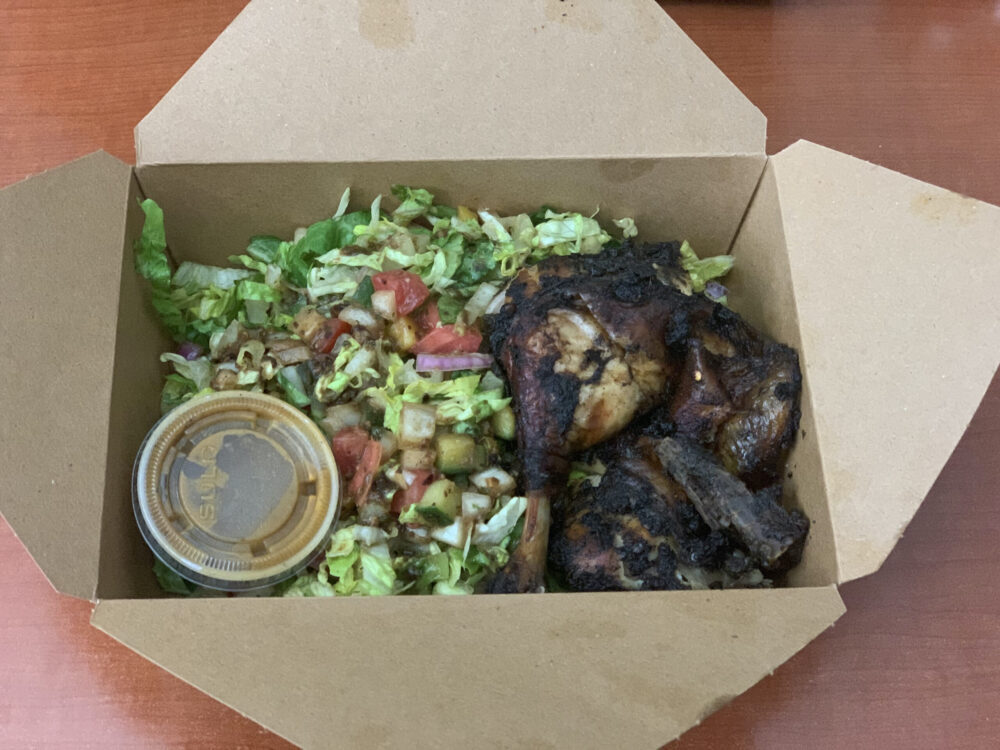 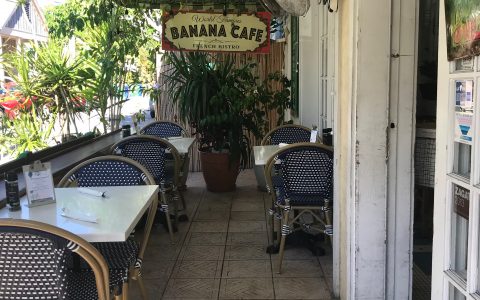